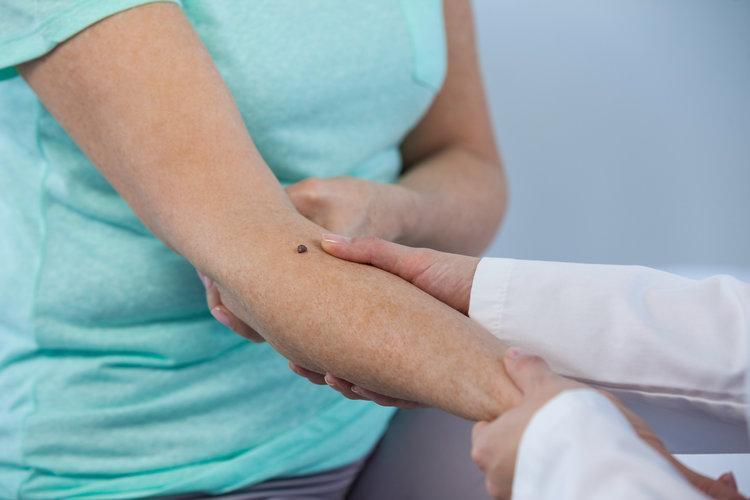 The Valley’s endless supply of sunny days is one of its best qualities. Excessive sun exposure comes with an important consequence though: an increased risk of skin cancer. As Valley of the Sun residents, we should all be skin cancer-savvy. Here are some key points about skin cancer to know. Basal cell carcinomas (BCC) make up the majority of skin cancers. Luckily, they are generally slow growing and rarely spread outside of the skin but can be disfiguring if left untreated. Most BCCs arise in sun-exposed areas such as the face, upper trunk, and arms. They often look like a pearly pink bump and may be mistaken for a small pimple or blemish. Unlike a pimple though, a BCC doesn’t heal up; it slowly grows larger. BCCs also have a tendency to form sores or bleed with minor trauma. Squamous cell carcinoma (SCC) is the second most common skin cancer. Like BCCs, most SCCs occur in chronically sun exposed areas like the face, arms, or upper trunk. They often start as a pink bump with a rough or scaly surface that grows and may bleed or form sores. While many SCCs grow only in the skin, aggressive forms have the ability to spread beyond the skin and can even be deadly if allowed to grow. Melanoma is the most dangerous form of skin cancer. They arise when ultraviolet damage causes mutations in the DNA of melanocytes, the color producing cells found throughout the skin and in moles. Most melanomas are brown or black but occasionally they can be skin colored, pink, red or blue. They often look like an “ugly duckling mole” – one that looks different from the other moles on your body. Features found in many melanomas are an asymmetric shape, scalloped borders, multiple colors, and a diameter greater than 1 cm. One of the most important clues that a mole may be melanoma is change – a new mole that appears out of nowhere and grows or an old mole that is changing in shape, color, or size should be a red flag. Melanomas can occur anywhere on the skin but they often arise in relatively covered areas such as the back and the legs. These sites are often hardest hit by the intense, intermittent ultraviolet damage that results in sunburns and is thought to be a major risk factor for melanoma. The good news... Unlike other cancers that grow inside the body, skin cancers arise where they can be detected and treated early. Learn more about skin cancer prevention, detection, and treatment at www.skincancer.org and remember to a) incorporate a yearly full-body skin cancer check with your provider, and b) have any suspicious skin growth examined as soon as possible.

2020, The year of the COVID, has been long and hard and all things good or bad have to pass. Nothing is permanent. We have to trust in life and not succumb to despair.

What Am I Grateful For Today?

I have gratitude for the self-realization of the present moment. Each moment is filled with grace. When I am fully immersed in the present in the here and now, nothing is ever enough. I am ever so thankful for the joy of simply being here with family

Hidden Anger : The Enemy Within

First of all I would like to thank one and all at Royal Oaks for inviting Pinnacle Care Internal Medicine to have an office on its premises. We feel privileged and honored. I would also like to thank the powers to be that run the monthly newsletter

In a very real way, the stories we tell ourselves inside our own heads every day change what and how we see our lives … And this "self story" is a simple collection of beliefs that ultimately make us what and who we are.

Heartbeats in Relationships - Care vs. Control

Hello, there! After what has felt like a long cold winter, spring has finally come, and with it, thoughts of love, freshness, and change! As we look about and see God's beautiful changes in nature, perhaps it's also a good time to look at our lives and how

What's In Your Pie? A Senior Looks At Life

I was recently asked if I considered myself more of a Physician or a Healer. A Physician possessing Medical Expertise vs. A Healer, who deals with the Mind, Body, and Soul. I would like to consider myself "both", but in actuality, I want very much to